Youth With A Mission Africa

Youth With A Mission is a global movement of Christians from many cultures, age groups, and Christian traditions, dedicated to serving Jesus throughout the world. Also known as YWAM (pronounced “WHY-wham”), we unite in a common purpose to know God and to make Him known.

YWAM Africa had some of its first beginnings in 1972 and 1973 with one of the first schools (School of Evangelism) in Rhodesia now known as Zimbabwe under the leading of Rudi Lack a swiss German. Today YWAM exists in over 17 countries across Africa.

What's your dream and to what corner of the missions world will it take you?

Mozambique in 1974 was a war zone. A bitter war for independence from Portugal was coming to an end. It was a crazy place for a young, single Afrikaans woman like Rika Grey to go. 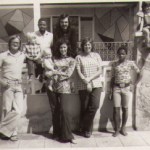 It all started with a stranger, a name on a note, and an act of simple obedience…YWAM’s first trip into North Africa in June 1969 led directly to the start of Hope House in 1972.